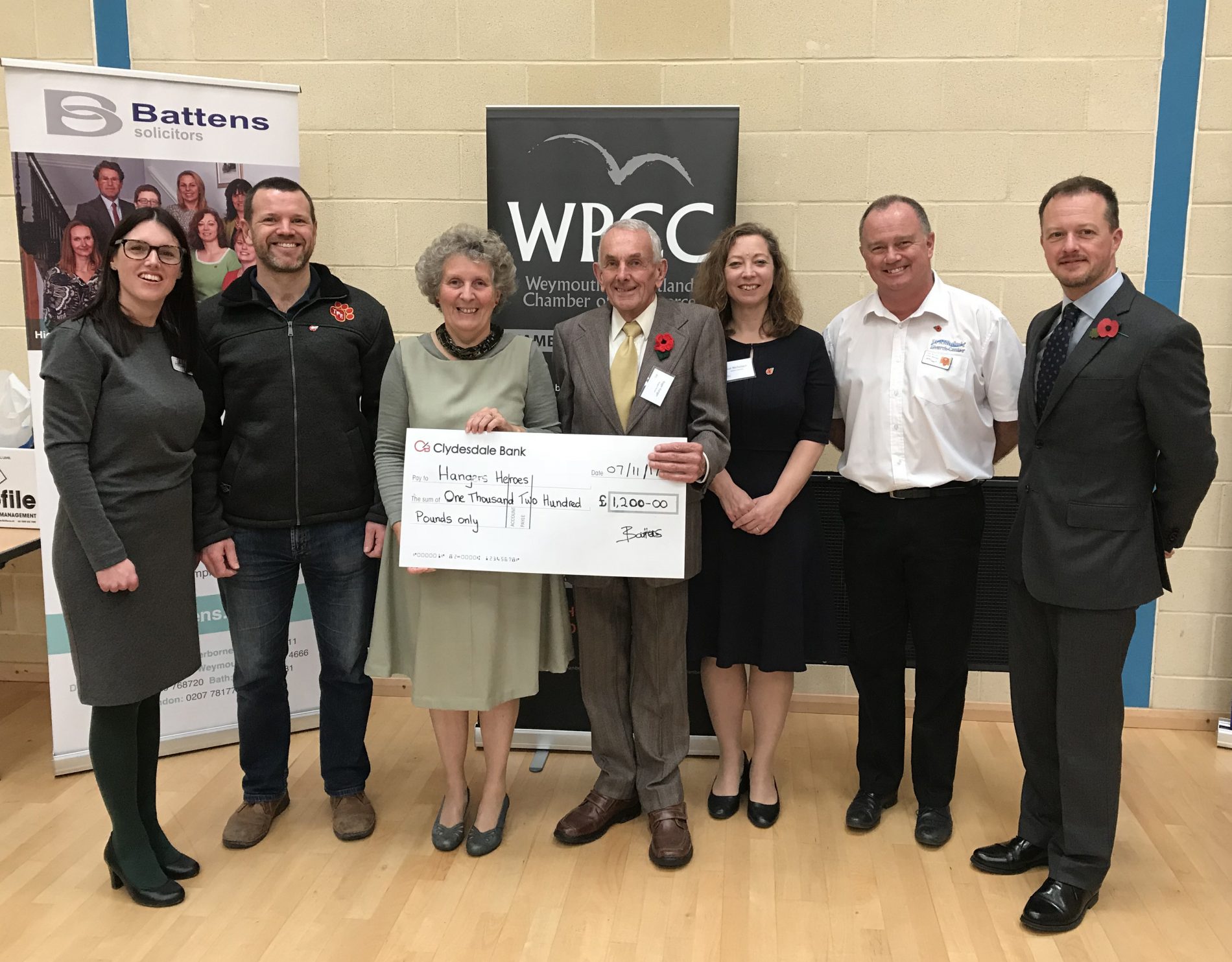 A cheque for £1,200 has been presented by Battens Solicitors to Weymouth charity, Hangers Heroes.

The donation was given to the charity at Weymouth and Portland Chamber last week, and is the result of funds raised by Battens’ annual beach volleyball tournament which took place in Weymouth this summer. The event celebrated its tenth anniversary this year and saw more than 200 business people dressed in carnival costumes serve, set and smash their way through a series of back-to-back volleyball matches in aid of charity.

“In the past, we’ve always selected the beneficiary charity ourselves,” explained Charlotte Stevenson, from Battens Solicitors. “This year we wanted to make the event extra special and thought it would be nice for teams to nominate charities of their choice and draw the winning charity’s name – Hangers Heroes – from a hat on the day”.

“Nina and Roger Hanger have tirelessly dedicated their time for a number of years to charity fundraising.  They were so appreciative of receiving the cheque and it was heart-warming to see the funds go to a cause which helps so many people.”

Hangers Heroes was set up in 2009 by Roger and Nina Hanger specifically to raise funds for causes in and around Weymouth and Dorchester.

‎”There are so many amazing charities locally,” says Nina Hanger. “This year we’ve already supported Dorset Search and Rescue, Stella Hayward Riding for the Disabled, Friends of the M. V. Freedom, and other small, not for profit local organisations.

“We’re thrilled to have been selected to benefit from the funds raised by Battens annual volleyball tournament, 100% of which will be distributed between our local charities.”

Cormac Linehan, who runs The Pet Experience pet shop and nominated Hangers Heroes, is full of praise for the charity.

“I have been involved in fundraising for Hangers Heroes since 2009 when I first took part in their big challenge event. They are a great organisation run for the right reasons: to support small charities doing important work and providing much needed services at a local level.

Battens volleyball tournament is fantastic; firstly because of the fundraising and giving back to the community element, but it’s also great fun. There’s nothing like a team of largely novice guys and girls trying to knock a volleyball over a net to put a smile on your face! Having the opportunity to be able to nominate Hangers Heroes to benefit from this event was too good to miss.”

The tournament raised £1,200 through team entry fees and a donation from the Battens Charitable Trust.