Find Out More
Home > Charity News > Bill Sivewright, CEO of Dorset and Somerset Air Ambulance pays thanks to volunteers and speaks of his retirement

Bill Sivewright, CEO of Dorset and Somerset Air Ambulance pays thanks to volunteers and speaks of his retirement 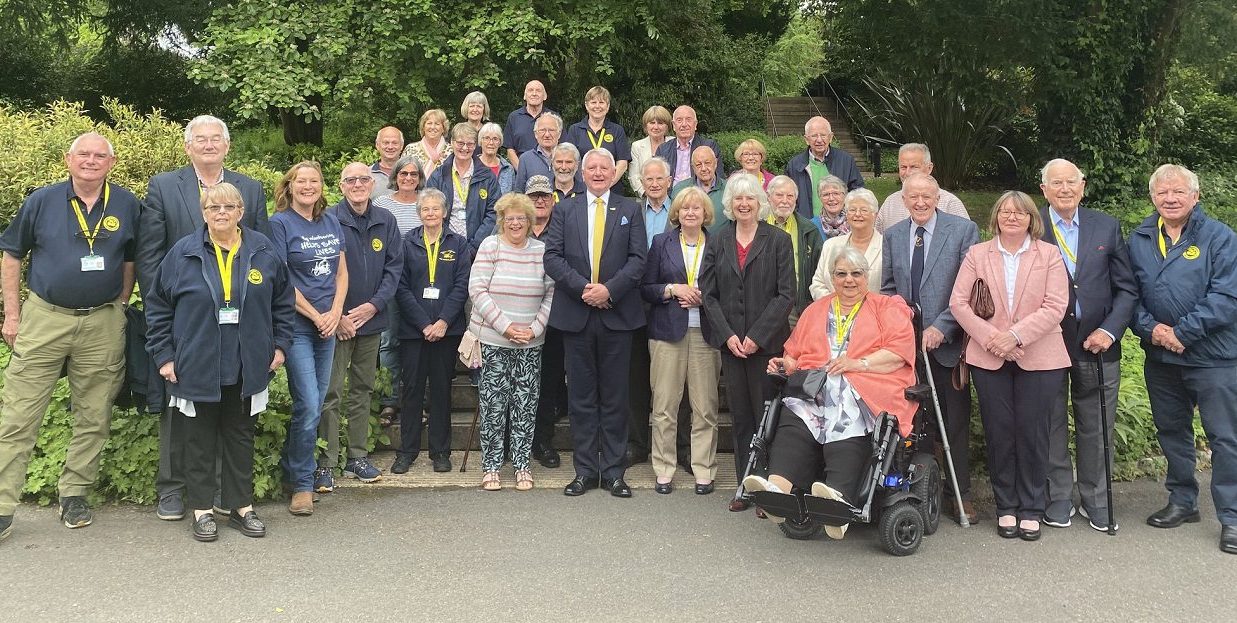 Bill Sivewright, CEO of Dorset and Somerset Air Ambulance was delighted to attend an event on Wednesday 25th May, to thank the charity’s volunteers for all their hard work, dedication and support in aid of the charity, prior to his retirement on 21st June.

Bill spent the afternoon expressing his gratitude and talked about how valued a resource the volunteers are, in enabling the charity to do what they do. He said:

“You are the eyes and the ears of the charity within the community. That is what gives us the community feel, because it comes from you, our wonderful volunteers. Some of you have been with us a very long time, even before me. You played an important part of showing me how volunteers supported the charity in so many ways, during my early days at the charity and for that I am really grateful. Obviously, volunteers come and go, depending on the amount of time they have available to gift to us. What is great for Dorset and Somerset Air Ambulance is that our volunteer numbers do not drop; when volunteers leave, others decide to join. This is terrific, as it shows that we are still relevant and that people will always step forward to help us. Thank you for all that you do in support of the charity.”

Bill became Chief Executive Officer in 2010. Over the past 11 and a half years at the helm, his inspiring leadership has seen DSAA become one of the most innovative and highly respected air ambulance charities in the country. During his time as CEO, the capabilities of Dorset and Somerset Air Ambulance have increased extra-ordinarily and the quality and range of clinical care provided to the population of the area has been utterly transformed. This has all been achieved collaboratively with regional health networks and within the clinical governance of the NHS. Bill has given his time, expertise and passion to the development of the service, because of his enormous public service ethos and his belief in helping others. Through this, Bill has enabled care to be provided to patients which simply was absent prior to his advocacy. His achievements are extensive and his ethos of ‘the charity will only invest public funds, if it has patient benefit’ is a legacy that he will leave when he retires next month.

Speaking of his time at the charity and describing some special moments, Bill said:

“When I joined Dorset and Somerset Air Ambulance after a full army career, I didn’t think then, that I would have such a fulfilling and enjoyable decade ahead of me. I certainly didn’t appreciate how much professional satisfaction and pleasure being part of this charity would bring. It has been one of those rare privileges to work with people who do so much for society as a whole. I never felt I was here to be given privilege or be served, but that I was here to serve others. I would like to think that I have done that to the best of my ability.

“During my first month, I remember doing two talks on the charity in one week. On Monday, I spoke to the North Petherton Harley Davidson Group and on Friday the Bridgwater Flower Club; that really was an indication of what was to come. Then there are the emotional times when you speak to families who have lost loved ones. Sometimes, subsequently being told that although a life could not be saved, because our clinical team were able to get there so quickly, a further three lives were saved by organ donation. It is a privilege for me to have these conversations and they will stay with me forever.

“If I were asked to single out just one thing that I am proud of contributing towards during my time at the charity, it would be when we set up the MSc Advanced Paramedic Practice (Critical Care) education programme for our paramedics in 2013. This lit the blue touch paper and then an incredible chain reaction happened, leading to many other key developments in the service. Taking the paramedics and helping them to reach a level that they had previously not thought of was incredible. Everyone wanted to learn more and do more for patients; that’s exactly what we are here for and it was inspiring to see. When we won a Health Service Journal Award in 2015 and the initiative was recognised nationally, it really was the icing on the cake and we knew that we had done something special.

“I am so appreciative that during my time with Dorset and Somerset Air Ambulance I have been given the opportunity to do things my way. That way has been by getting to know people, getting to know their families and making friends. Together we have been on a journey and one of the most amazing things is to see how the team have developed professionally and as people. I feel very proud to have been a part of that.”

The new CEO of Dorset and Somerset Air Ambulance will be formally announced on Tuesday 21st June.

More information about Dorset and Somerset Air Ambulance can be found by visiting: www.dsairambulance.org.uk