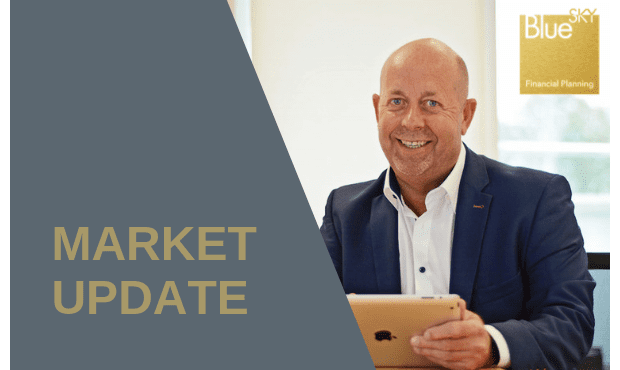 Do we go more defensive, or do we hold what we have in the portfolios? That is a question which has been on our minds since I returned from holiday at the end of June. The markets have an uncanny habit of giving you hope and then being cruel, especially in uncertain times.

This year there have been many false dawns, but the trend has been for equity and bond markets to fall in unison. They won’t continue to do this and at long last we are seeing signs of a decoupling which means that bonds are more likely to play an effective part in a portfolio. The expected softening of inflation is offering encouragement for this asset class.

If we were isolating the numbers from sentiment, regarding stock market valuations across most sectors and indices, then we would not only be holding but most likely increasing our exposure to pure equities. However, we can’t ignore sentiment which sadly is deteriorating on many fronts and is now likely to feed into corporate earnings.

Some companies have seen this as a signal to buy now (Coutts) whereas others are holding existing assets, and some have increased their cash holdings (LGT Wealth) and firmed up their defensive positions.

No hiding place!
The problem is that there has been no hiding place. A statement in Investment Week said, “for the first time in over a decade, listed stocks and bonds are positively correlated”, something we have alluded to in our previous commentaries. “Combined with geopolitical tensions, record inflation and monetary policy shifts, investors have sought alternative assets to achieve returns”.

The problem with alternative assets is they can be volatile too, commodities being a case in point. Infrastructure, one of the very few assets to have a positive return since the Ukraine invasion, whilst offering some inflation protection, is not immune from sudden pull backs in price.
Then, of course, there is ‘cash’. Conventional wisdom suggests that holding cash during times of extremely high inflation is nonsensical but at least cash is not volatile.

So many different views!
Xavier Baraton, the Global Chief Investment Officer at HSBC Asset Management, in a piece in Investment Week, explained that we are now entering a new ‘macro economic environment’ of persistent inflation, higher interest rates and volatile economic cycles. He went onto say “the positive correlation of stocks and bonds marks a significant paradigm shift which is impacting the approach to diversification, shining a spotlight on alternatives and defensive assets. This situation supports the case for real assets and other ‘new diversifiers’ that can continue to deliver solid diversification while increasing portfolio resilience”.

On the other hand, whilst recognising the challenges to the global economy, Coutts in their mid-year outlook, stated that opportunistically they increased their equity weightings. From a long-term perspective, they were of the belief that the sell-off looked advanced and pessimism had become consensual. Basically meaning that much of the damage was in the price. It’s not quite worked out in the short-term but is likely to be beneficial over the long-term.

Turkeys voting for Christmas!
From the start of the year, metrics and sentiment have accelerated, albeit with pockets of optimism. Even since my return from holiday the cycle has shifted quickly with fears over inflation now being transitioned to fears over the economy, earnings, and consumer sentiment.

Yet, in the face of these fears we see Central Banks ramping up interest rates determined to dampen inflation but at the same time damaging their economies and increasing the possibilities of recession. Very strange but necessary!

The Bank of England (BoE) Governor, Andrew Bailey reinforced that policy makers are prepared to move borrowing costs higher in bigger steps to control inflation. The aim is to bring inflation back to the 2% target and there are no ‘ifs and buts’ about that goal. He went onto say “we want people to see that there are more options on the table than another 25 basis points”, referring to likely interest rate increases.

Bloomberg commented that Bailey’s speech reinforces a growing view that the BoE is prepared to risk growth, or even spark a recession to bring price gains under control. The BoE has already increased interest rates in the last five Monetary Policy meetings.

In the US, the same is happening but with a more vibrant economy, the rate hikes are likely to be more aggressive with the next increase likely to be 0.75% according to the market.

What is the outlook?
Clearly consumer confidence will weaken but if measures form Central Banks go too far, there will be a need to add stimulus back into the economy and reduce interest rates dramatically. A very difficult balancing act.

There are clearly strong warning signs, not just for consumers but also from companies. A Federal Reserve Bank of Chicago survey on the outlook for the US economy decreased to minus 60 in June, the worst reading in data since 2013. The average has been a reading of 25 and last summer it was at the 83 level.

In the survey, Bloomberg reported that just 17% of respondents expected an increase in economic activity over the next 12 months. It’s clear that sentiment has tumbled.

There is no doubt that the speed of change has been dramatic and sentiment has weakened. Yet, despite this, markets have been relatively resilient. Here in the UK, helped by a rise in GDP and lower inflation figures.

When you look at the above graph, when the deterioration in the outlook for the US economy has bottomed, it coincides with an equity rally. The question is will it get worse before it gets better?

Our view at Blue Sky is that it will and hence in our next switch on the 27th of July (dictated by platform logistics) we are going to increase our cash holdings and add a small holding in gold and bonds, whilst reinforcing our positions in ‘real’ infrastructure which is largely immune from a slowdown in consumer spending. We will also increase our holdings in the Far East for those in the more adventurous portfolios, in anticipation of a recovery in that part of the world. Clearly, we are not going to sell all equities, just those in specific sectors (Real Estate and Commodities) which we believe could react sharply to a further deterioration.

We will send all clients details of our recommendations in due course.

Being resourceful
I’ve highlighted before how countries, companies and indeed consumers find a way to steer through the mire, just like we did in 2020. Although the reality is, that we are now reeling, in part, from the enormous stimulus added to the economy in a quest for growth and inflation!

In response to the various dynamics, a case in point is how Europe is now the number one market for US Crude Oil exports for the first time in six years, in response to the fall out of the Russian invasion.

Conversely, Russia offers its Crude at steep discounts to India and China which have not imposed any sanctions or bans. Of course, this delivers a potential boost to such economies as they gain a competitive advantage.

It appears that we should be investing in Prosecco as sales of the Italian sparkling wine have risen by 40% in the US. Is this because of fears over inflation and concerns over spending? Maybe both! However, the reasons given in an article in Bloomberg is that we are all meeting up a lot more, especially in business and the drink has become in vogue for lots of young consumers who find wine intimidating and stuffy.

I suppose we should really worry when they only drink water!
Summary
There is so much going on that I could write reams and reams, but enough is enough. Hopefully, you have followed me to this point.

Events are fast moving; opinion is changing quickly, and we are seeing signs that some areas are becoming attractive. We are not yet willing to increase any risks across portfolios, in fact we are looking to protect where possible, using in part some cash positions, in anticipation of a deterioration in the immediate outlook. What will hopefully be the last leg of this crises. It may not happen, but we believe at this juncture it pays to be prudent.

It’s important to stress that any actions we take will be with the short-term in mind and a focus on the immediate outlook. To boot, most assets have behaved the same way this year, but we think this is now about to change, particularly in the bond/credit space.

We are expecting corporate earnings to come under pressure but if inflation is brought under control quickly and Central Banks respond accordingly, we believe growth assets will respond very positively. We remain vigilant and primed to react in a nimble way.

Gary and the Investment Committee