Building for the Future With Greendale Construction 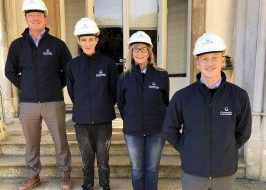 Dorset Chartered Builders, Greendale Construction Limited, is building for the future with the appointment of six new staff.

Three young people have been given the opportunity to learn valuable trades as part of the apprenticeship scheme.  20 year old Liam Cotton has joined Greendale as a painter and decorator apprentice; 16 year old Sam Sutton as a carpentry apprentice, and 17 year old Cameron Sollazzo as an apprentice bricklayer.  All three will gain on-site experience working at the firm’s projects across the county and beyond, as well as attending Bournemouth & Poole College where they will work towards NVQ qualifications in their chosen trades.

Will Jepson has also joined the company on the Graduate Training Programme and is mentored by one of the company’s senior contracts managers who himself started with Greendale on the same Graduate Training Programme several years’ ago.   As part of the Programme, Will attends college on a day release basis studying towards an HND in Construction, and once completed, will go onto studying towards his degree.

Neil Drissell has returned to Greendale in a new role as contract manager for the Small Works Division, and John Hayes has joined as QS/contracts manager.  Chris Loader has been promoted from within the firm where he initially started as an apprentice carpenter ten years ago.  After completing his apprenticeship Chris went on to study for an HND in Construction, which he completed in 2015.  Chris is now studying towards a BSc (Hons) in Construction Management and attends Southampton University on a day release programme.

Chris said; “I’m really pleased to be given the opportunity to advance my career at Greendale who will generously fund my 3 year degree.  Having started with the firm as an apprentice, it’s both reassuring and motivating to be with a company who value its employees to such an extent.”

Maria Seabright, HR and finance director at Greendale Construction, commented: “Greendale is a company who is passionate about the future of the construction industry, and in helping people build for their own futures through their careers.  Our employees are our finest asset, and so it is only natural to invest in them and their professional growth.  We continue to link with local schools and colleges to engage with young people and encourage them into the industry.”