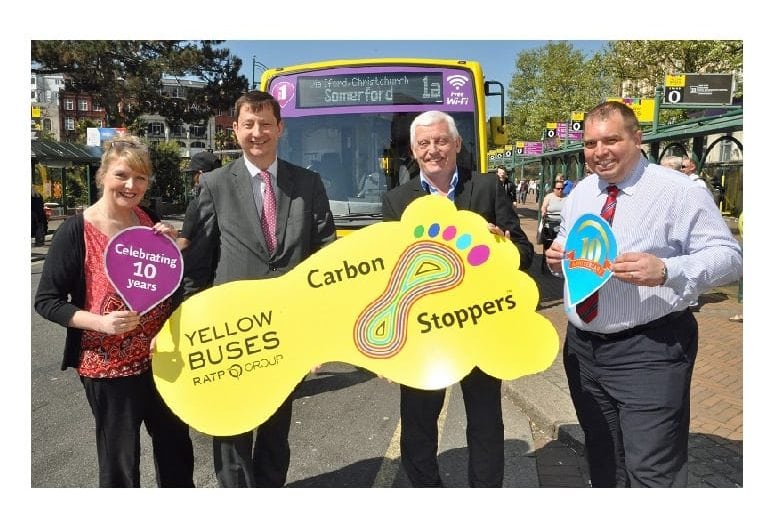 Yellow Buses has celebrated the tenth anniversary of its innovative Carbon Stoppers scheme after raising more than £30,000 for 80 local charities and good causes.

Since 2008 the bus company has held a ‘Thank You Thursday’ each week when every trip taken by passengers on the day contributes to a separately administered Community Chest.

Yellow Buses has pledged a minimum donation of £50 per week to the Carbon Stoppers fund with readers of the Bournemouth Daily Echo invited to nominate worthy recipients.

The innovative scheme was the first of its kind in the UK bus industry and has either been nominated or shortlisted for a variety of awards.

Yellow Buses has now confirmed it will be continuing with Carbon Stoppers into the next decade with the support of the Daily Echo.

David Squire, Yellow Buses’ Managing Director, said: “What began as a way of encouraging more people to cut down on their carbon footprint by using the bus has ended up making a real difference to more than 80 charities and good causes.

“We are a local company employing local people and serving the local community. It is only right that we put something back into the community we serve.

“We’re especially grateful to the Daily Echo for publicising Carbon Stoppers to its huge online and print audience.”

Andy Martin, Daily Echo Editor, said: “We’ve backed Carbon Stoppers from the very beginning and are delighted to have played our part in the success of such a worthwhile project.

“Raising more than £30,000 for local charities and good causes, many of which touch the lives of our readers, is a fantastic achievement. We’re only too pleased to continue our support for such an innovative scheme.”

Yellow Buses operates a fleet of 140 buses and 16 coaches with more than 410 staff.

The company carries just under 15m passengers a year with its vehicles operating nearly five million miles across the Bournemouth, Poole, Christchurch and East Dorset area.

Yellow Buses was named as the top operator in Bournemouth and Poole – and joint third nationally – in the latest annual Bus Passenger Survey, produced by the independent watchdog Transport Focus,