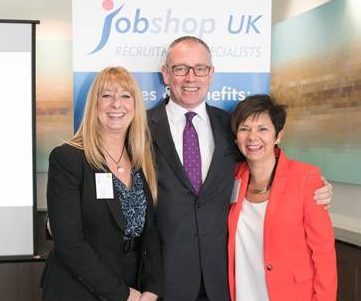 Bournemouth based recruitment specialists, Jobshop UK, welcomed Kevin Green, CEO of the Recruitment and Employment Confederation (REC) to its Directors’ Lunch where he discussed the future of jobs and the impact of technology on employment, both nationally and globally.

Kicking off with some positive news about the UK’s resilient jobs market, which has adapted to, and survived the recession of 2008/09, Mr Green announced that currently a record 32 million people are in work – over 3 million more than in 2010.  The employment rate is currently at a record high of 75 per cent, and unemployment is at the lowest since 1975. The UK employment rate is now the fourth highest in the European Union and is 7 percentage points higher than the EU 28 average.

With the worldwide jobs market rapidly changing, Mr Green discussed how many of the jobs being undertaken today will simply not exist in seven years’ time.  However, many new jobs are emerging – being driven by the advancement of new technologies such as artificial intelligence, 3D printing and robotics.  Many of these new jobs will require skills very different from today’s requirements, and in addition, people’s expectations of the jobs market and the way in which they choose to work, are evolving.  The rise of self-employment and the gig economy has been rapid, with currently 4.8 million (15 per cent of people) are choosing to work in this way.

Mr Green also reassured the assembled director’s over concerns regarding technological advancements taking over jobs, citing that although technology has always been responsible for destroying some jobs, it also creates new jobs.  However, a statistic quoted which surprised many of the guests during the presentation was that between the years 1995-2015, there was a growth in low paid jobs, yet a decrease in mid-skilled jobs which are being eliminated across the global employment market, leaving a gap in what are termed ‘stepping stone jobs,’ and those positions historically seen as reasonably well paid, middle-class positions.

Tracey Wood, Jobshop UK director, said: “As always, Kevin Green’s talk addressed many local, national and global concerns. It was startling, but not altogether surprising to hear how the future of jobs commission published its report with recommendations including an urgent call to action.  The research showed that if changes are not made, the economy will be hindered by increasing skills and talent shortages.  The recommendations start with a change in how children are taught in schools, with a move away from the factory-led ideaology of learning, with more consideration paid to creativity and individuality.

“Businesses need to review managing and hiring practices, and with 8.5 million part-time employees making up a huge proportion of the workplace in the UK, it is still shocking to learn that 92% of employers do not offer flexible working practices as standard, which not only narrows employees’ options, but also the businesses.

“Although we are saddened that Kevin Green is stepping down as CEO of the REC in 2018, we are delighted that as a regular speaker at the Jobshop UK director’s lunches, he has promised to continue speaking for us at future events, and we very much look forward to that.”