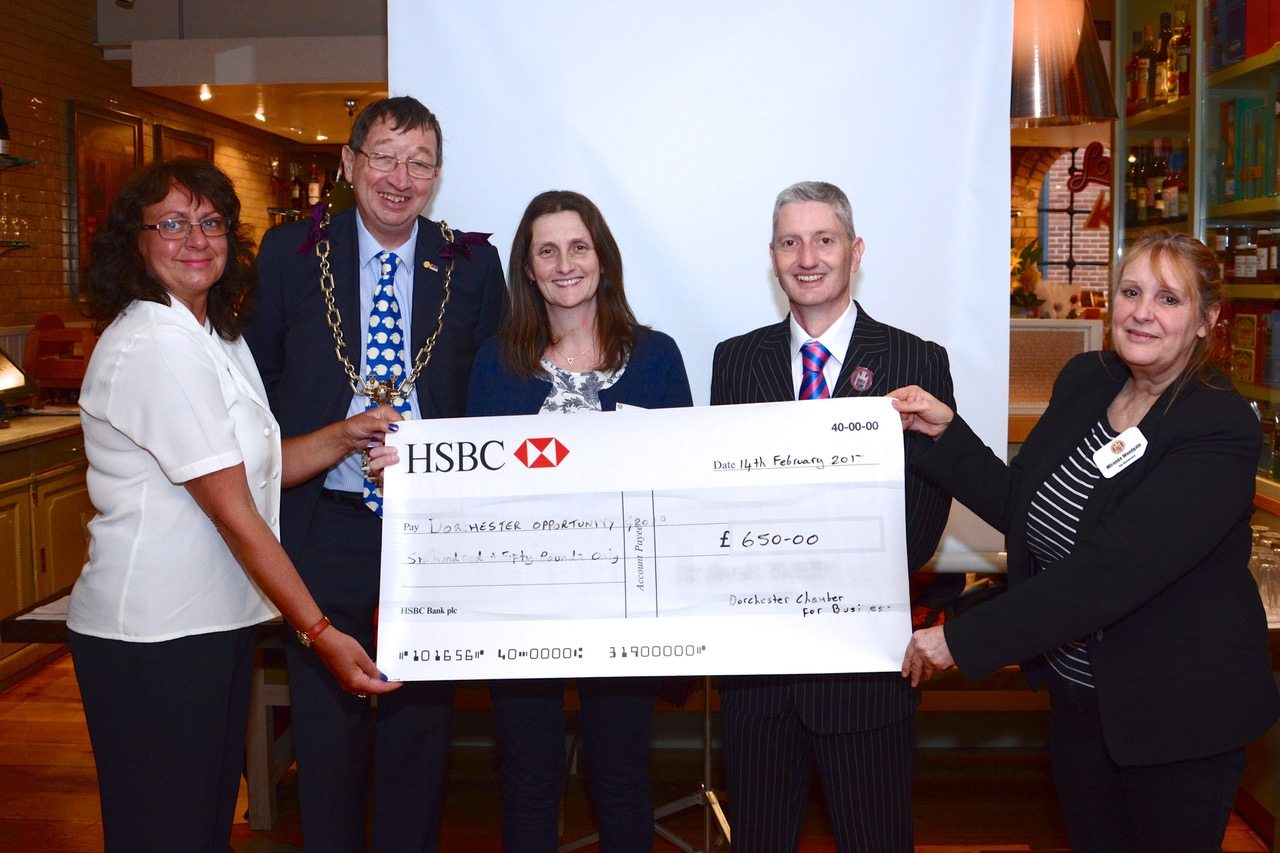 Top of the breakfast agenda was a donation of £855 – the proceeds from two Chamber events – to the Dorchester Opportunity Group, which is facing closure unless £40,000 can be raised this year to keep the facility open. Proceeds came from the Chamber’s Valentine’s Day breakfast prize draw which raised £205 and the Christmas raffle, held during the President’s Breakfast at Minterne House shortly before Christmas which netted £650.
DCFB’s President, Steve Bulley presented a cheque to Nyree Gibb, manager of Dorchester Opportunities Group after the breakfast. He said:“We are delighted that our members have been so generous and that the money raised has gone to such a deserving cause”.
Dorchester Opportunities Group is a pre-school facility for children with additional needs.  All children at the group are referred by professionals from health, education or children’s services where specialist input and support given at an early stage in the child’s development could prove beneficial.  Some of these children are severely challenged and the group has an amazing success rate in supporting their needs.
The event also featured the launch of the Chamber’s Retain Campaign – to help local businesses recruit and retain employees from the pool of talented students as they leave education, encouraging them to stay and work to make the town prosper. There was also a prize draw with appropriately themed prizes to mark the day. These included a giant bar of chocolate made especially for the raffle by Matt Tarran from House of Chocolate, a Valentine’s hamper of goodies plus a meal for two with a bottle of wine – both generously donated by Carluccio’s.
Mayor of Dorchester, Councillor Tim Harris drew the winning tickets. Prizes were won by Sandy Jordan of Jordan’s Jewellers who got the chocolate bar; Julie Grant of Blueloop, who secured the meal voucher for two and Chris Pocock of Barclays who took home Valentine’s hamper.  Everyone who attended the breakfast took away delicious chocolate samples provided by the House of Dorchester.

MEMBERS of theDorchester Chamber for Businessstarted Valentine’s Day with a hearty networking breakfast and prize draw at Carluccio’s in Brewery Square – and made a difference to one local charity.