Legendary golfers on the ball at 30th anniversary celebration 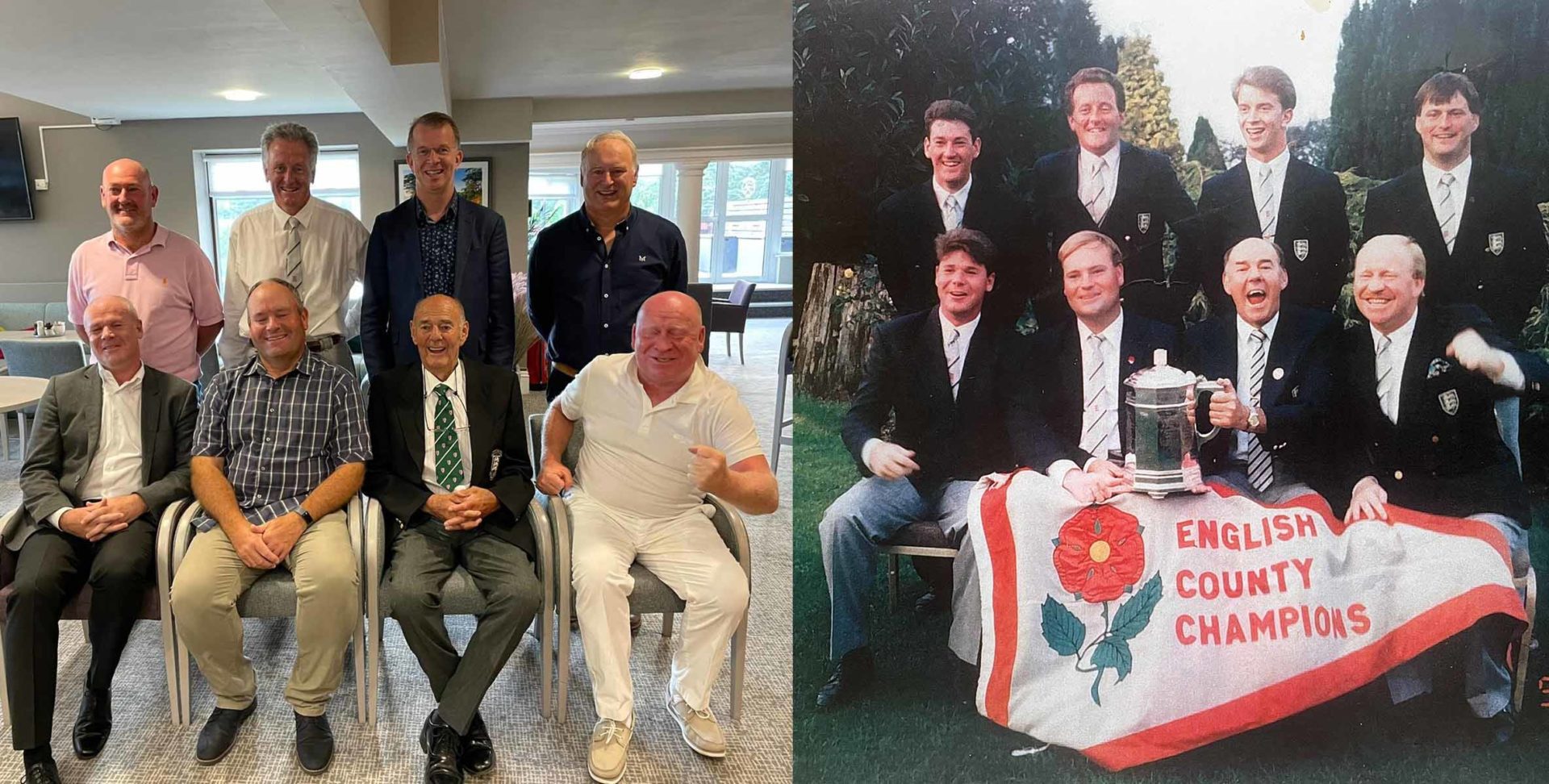 Legendary golfers on the ball at 30th anniversary celebration
Golden golfers rolled back the years at a reunion to celebrate the 30th anniversary of Dorset winning the national amateur championships.
Every player from the seven-strong team and its non-playing captain attended the special event to mark their historic victory in 1992 at Kings Norton in Birmingham – the only time the county has won the prestigious English County Finals Championship.
And they even recreated their winning pose of 30 years ago to tee off the reunion party at Parkstone Golf Club, which was sponsored by regional law firm Ellis Jones Solicitors.
Lining up were Lee James, Peter McMullen, Martyn Thompson, Tony Lawrence, Steve Edgley, Michael Watson, Captain Doug Pratt and Rodger Hearn.
The celebration was the first time some of the players had seen each other in many years since claiming the prize three decades ago.
Organiser Rodger Hearn, who holed the winning putt, said: “It was wonderful to get the team back together and reminisce about our glorious victory.
“As Doug said at the event, looking back it is remarkable to think that it was 30 years ago that we won the championship and what a marvellous achievement that was.
“The reunion was a great way to renew old acquaintances as well as celebrate the 30th anniversary milestone with other members of the Dorset hierarchy, led by Dorset chairman Stuart Mackenzie and other committee members including ex-captains, former county presidents and dignitaries. It’s about time Dorset won the championship again!”
The iconic team members came from all corners of Dorset to claim the championship trophy in 1992 and become well known in the golfing world.
They include Weymouth and Dorchester professional Michael Watson, Parkstone professional Martyn Thompson, former county captains Peter McMullen from Ferndown and Rodger Hearn from Parkstone, and American university champion Steve Edgley from Parkstone.
Lee James went on to win the British Amateur Championship in 1994 and was part of the Walker Cup which beat the USA, including Tiger Woods, in 1994.
Sherborne professional Tony Lawrence became a county champion multiple times while non-playing captain of the day Doug Pratt from Weymouth became county president.
Nigel Smith, managing partner of Ellis Jones Solicitors, said: “It was a privilege to sponsor the anniversary celebration with some true legends of the game in Dorset.
“Their championship success ranks highly in the annals of the county’s golfing history, and the event was a fitting way to mark their achievement 30 years on.”
Ellis Jones Solicitors – with more than 170 staff including 21 partners – has a dedicated sports law department and sponsors a wide range of clubs across Dorset. It is also the trusted legal partner for Pure Golf Management.
ENDS

PICTURE:
WATCH THE BIRDIE: The winning Dorset team which won the national amateur golf championships in 1992 and 2022. On the back row, from left, are Lee James, Peter McMullen, Martyn Thompson and Tony Lawrence. On the front row, from left, are Steve Edgley, Michael Watson, Doug Pratt and Rodger Hearn.