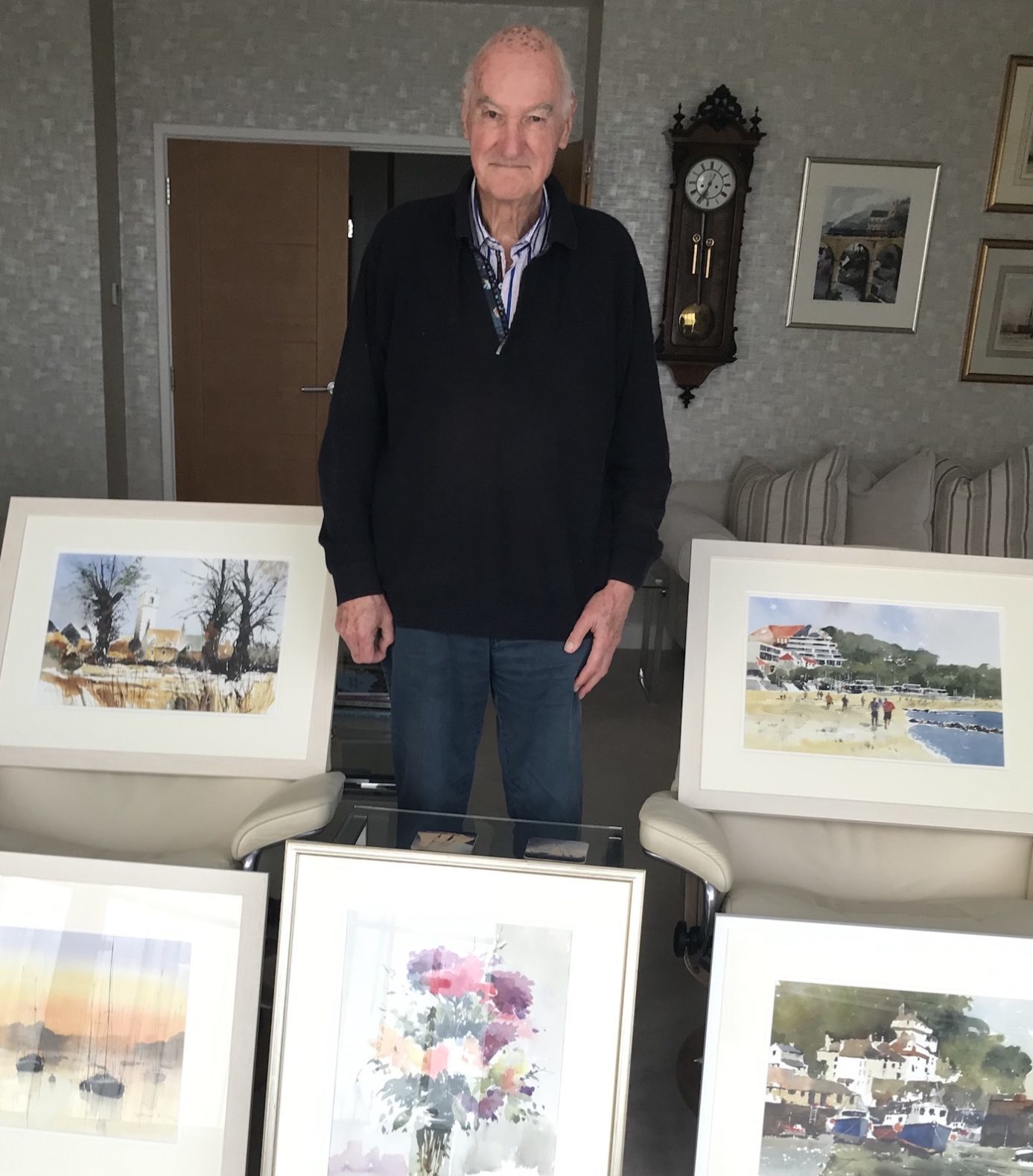 With more than 70 of his watercolours on show and for sale, former Poole Arts Trust chairman Mike Jeffries is quite clear about the aim of his new exhibition at Lighthouse, Poole’s centre for the arts, that runs from Wednesday 8 until Tuesday 21 June in the Main Gallery.

“It’s to raise as much money as we can for two local charities – Lighthouse and Lewis Manning Hospice Care,” he declares. “There’s no claw back, I’ve donated the framing, the mounts, everything, so at the end we just take the proceeds and divide them by two. Very simple.”

A Fellow of the Royal Society of Arts, Mike retired from the chairmanship in 2020 after four years in the role, and last exhibited at Lighthouse in 2018.

“I want to make sure I’m there as often as possible during the two weeks, to be on hand to answer questions and meet people – some just need a little persuasion.”

A Geordie by birth, with homes in Lilliput and Barbados, Mike trained as an architect and spent most of his career with WS Atkins Plc, a multinational design, engineering and project management consultancy where he became CEO and then chairman for ten years. He was also chair of IT software business Civica; car park company NCP; Wembley National Stadium Ltd and VT Group, the shipbuilding and support services company.

“I keep my hand in with three or four companies, pro bono work, I’m an investor in some of them, and I enjoy it, but I love to paint,” he says.

“My kids got me a painting course for my sixtieth and I went back to the same guy year after year, but I didn’t paint in between. I was too busy. So, it wasn’t until about ten years ago that I found I had the time to pursue painting properly and now I’d paint every day if I could.

“I started off painting street scenes – as an architect it seemed obvious to me – and still love street scenes now, but I also like marine subjects, which are about as far as you can get from a street scene. There’s not a straight line anywhere!”

Mike reveals his painting mentor, the fine British watercolourist John Yardley, told him that ‘if you see a jumble paint a jumble’, a maxim he incorporates in his distinctive, impressionistic painting style.

“I paint what I like and finding a subject is more complicated than you might think so I take lots of photos and sketches and maybe only one or two end up being painted. Some scenes I’ve painted several times because I just enjoy them so much and there are several local views in this exhibition, as well as scenes from London, Venice and other places.

“Watercolour is the most difficult medium to control so although I would rather paint outside, the reality is I do most of my painting indoors. A couple of drops of rain can ruin a painting, but if it’s too hot it dries the water content and then you get tide marks and horrible stuff like that. In Barbados it’s lovely and hot all the time, but hopeless for painting outdoors, and we know all about the weather in this country of course.”

Whatever the weather though, for Mike and his wife Pam, this country – and Dorset in particular – is home.

“Dorset has left a great impression on us. We are patrons of Lewis Manning Hospice and, of course, I have a long association with Lighthouse and another local charity, Diverse Abilities. They say charity begins at home and for me it begins at the doorstep so although there are many, many worthy causes all over the world there is plenty of need much closer to home and we confine our charitable giving to local organisations.

“Being chairman of Lighthouse was incredibly interesting. There’s a great deal of talent and creativity in the building and in the team that runs it, from the top down. I was there recently for the show RUSH, about the Windrush generation, and I’m always impressed when I go there that everything appears to happen so smoothly, like clockwork.”