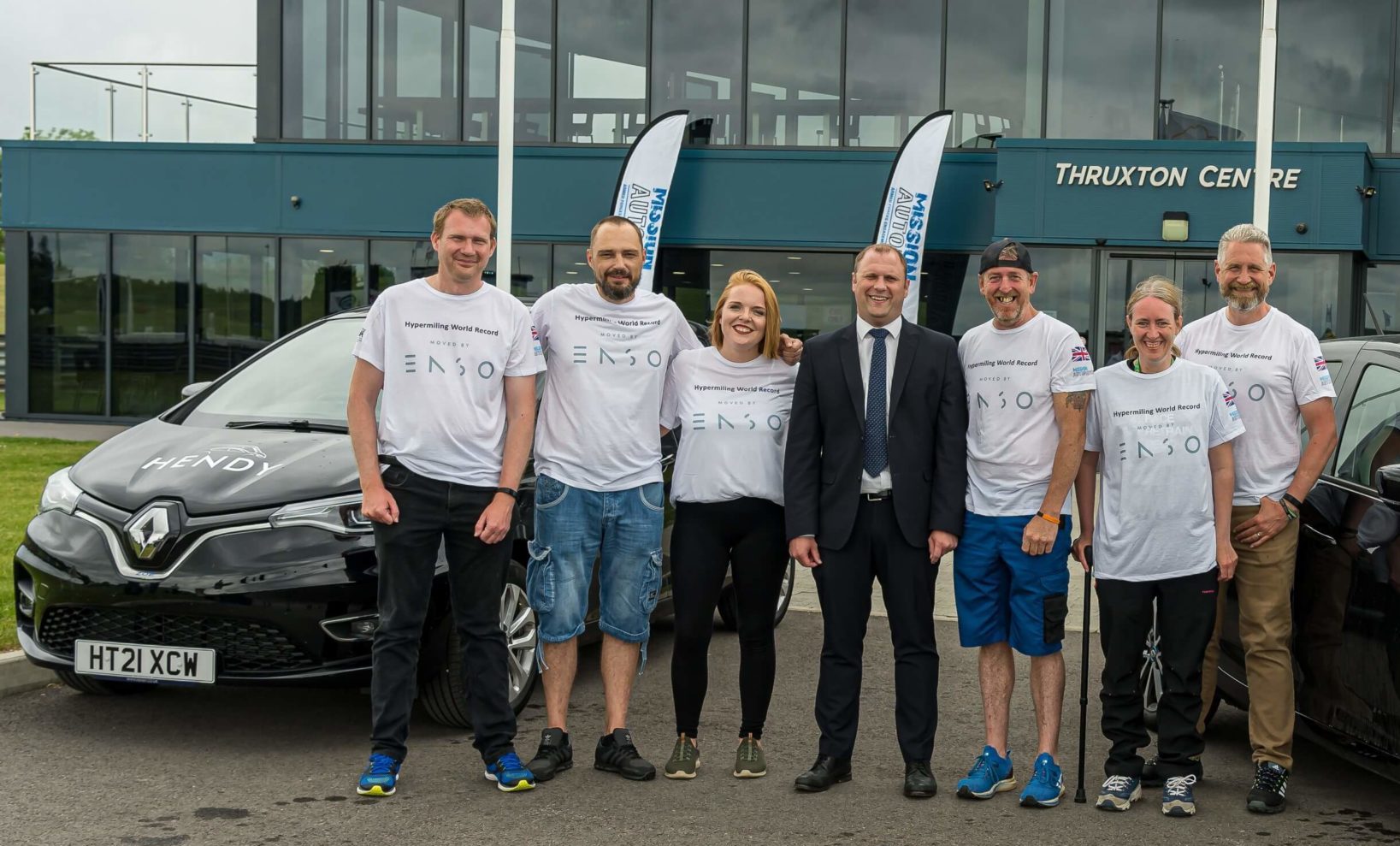 Hendy Group is toasting the success of Mission Motorsport in setting a new world record in hypermiling – which maximises the fuel efficiency of a car – in cars supplied by the automotive group.

Hendy supplied two Renault ZOE vehicles for the record attempt at Hampshire’s Thruxton circuit with the ZOE recording an impressive 475.4 miles on a single charge.

Mission Motorsport, The Forces’ Motorsport Charity, used ENSO’s range extending EV tyres for the assault on the existing record for the longest distance driven in a Renault ZOE, on a single charge.

Driving day and night, for over 24 hours, at the optimum average speed of 19mph, the Renault ZOE reached a world beating 475.4 miles on a single charge, smashing the previous French record by 124.4 miles.

An identical Renault ZOE, equipped with its standard OEM tyres and driven by the same team, reached 424.7 miles in comparison, well in excess of its official WLTP range of 245 miles.

To ensure that the record was an honest endeavour, the pair of identical Renault ZOEs were supplied by the Hendy Group in complete showroom specification, with no special tuning. The factory fitted OEM tyres were also retained on the first vehicle, while ENSO’s EV tyres were fitted to the second vehicle. To make sure that both sets of tyres were fitted, aligned, and set correctly, specialist PROTYRE was on hand to assist both Renault ZOEs eke the most miles from each charge.

Hendy commercial director Mark Busby said the group had been delighted to be involved in such an incredible achievement.

“The whole team did an amazing job in setting a new world record and their efforts really demonstrate the capability of the Renault ZOE in terms of its potential range,” said Mark.

“We jumped at the chance to be involved in this project and send our congratulations to Mission Motorsport for setting this new record.”

“Thruxton was the obvious choice for this record attempt, but despite being the UK’s fastest track, the key to hitting 475.4 miles was finding the optimum speed and smooth consistent driving. Backed by ENSO’s unique EV tyre technology we were certain we could break the record, but what we couldn’t have foreseen was the incredible difference in efficiency, distance and feel with the ENSO tyres,” said James Cameron, Mission Motorsport CEO.