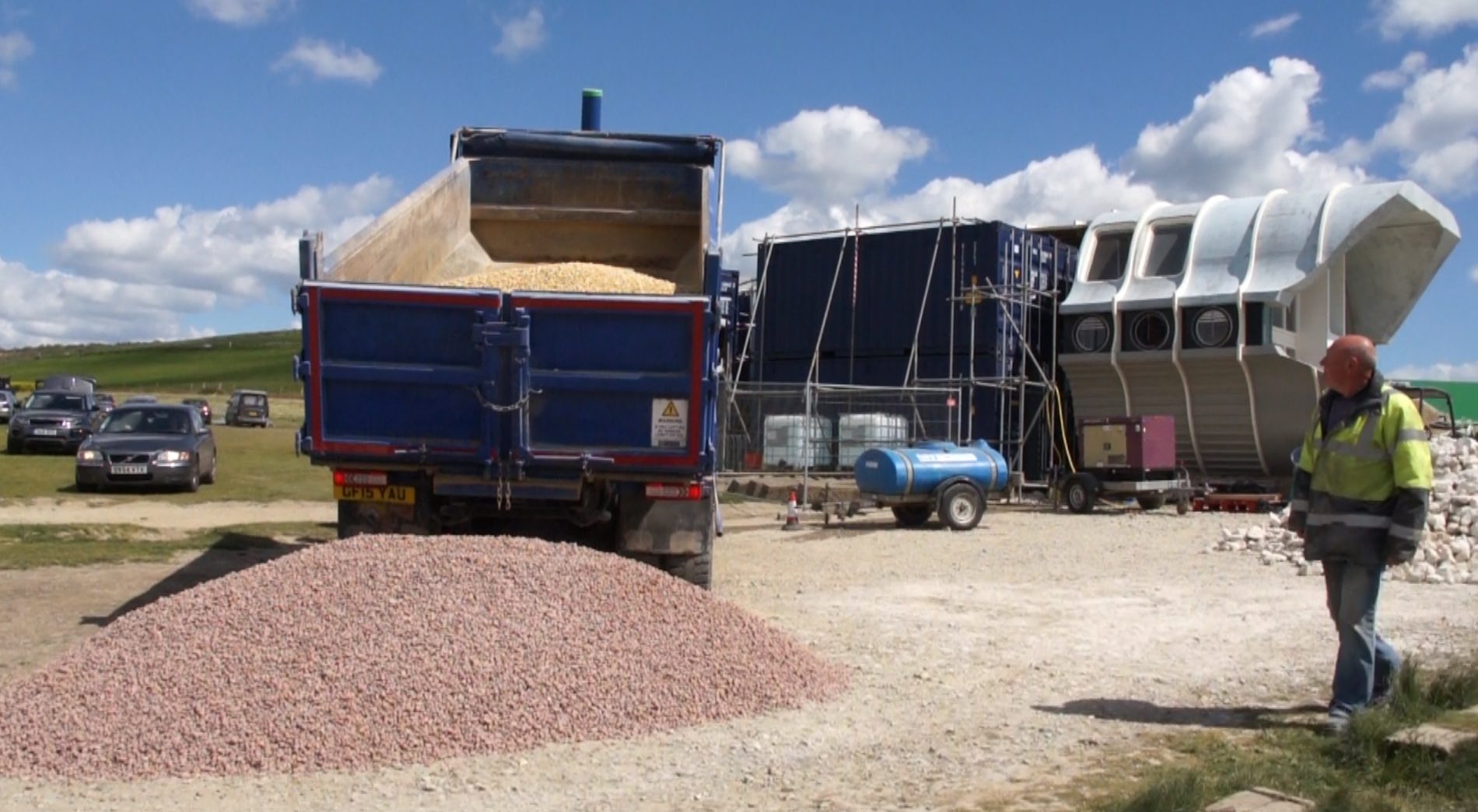 The worlds of aggregates quarrying and science fiction television series (starring A-list Hollywood actors) do not often meet. That changed back in early May when a film set sprung up at Kimmeridge, Dorset, near our Swanworth Quarry headquarters,  and the production team of Electric Dreams – an anthology based on the works of author Philip K Dick – requested stone for one of their sets.

The 10-part show has an all-star cast including Bryan Cranston of Breaking Bad fame, who also had a producer credit.

The fourth episode  of the series – ‘Crazy Diamond’, which starred Reservoir Dogs and Boardwalk Empire actor Steve Buscemi – featured the elaborate set on the Kimmeridge coastline for just a brief period of screen time – but required days of preparation, and a huge team working around the clock.

Gabion baskets were assesmbled on-site by the film crew, who also constructed the futuristic-looking set.

Assistant Art Director on the shoot, Abbie Bellwood, visited Swanworth Quarry to establish what was available and what would be needed.

She said: “It’s always really good when you go to a new site and can use local companies, especially when you’re trying to get things like aggregate stone, you don’t want to be travelling too far.

“Also, [in terms of] changing our minds – it always happens, and I found that Suttles were very accommodating. We often want something, and then it changes, and then the money is a factor, then we need to get it signed off by somebody – so there’s a lot of processes.

“We’ve had a great two days of shooting – we had some great drone shots, and this site is fantastic.”

Suttle Stone Quarries  sales manager, Dave Penney, said: ““The production team had a look at the gabion we had on offer, and other decorative chippings, and decided to use us for all materials to the site, which obviously we were ecstatic about.

“The set was really impressive  and our material really was at the core of it and made it stand out.”

In the episode, Steve Buscemi’s character Ed Morris, living in a bizarre world of pig-human hybrids, is approached by a synthetic woman called Jill (Sidse Babett Knudsen). Ed agrees to help Jill carry out an illegal plan that sees his world crumble…

We also supplied stone for the construction of an award-winning industrial estate at Winfrith, Dorset. Pictures are available for this if it’s of interest.

We’ve supplied over 7,000 tonnes of Limestone from our Swanworth Quarry for the ongoing construction of the award winning Dorset Innovation Park.
The stone has been used in the construction of the sub-base for the new units and Permeable Limestone was used in the road and car parking areas.
Site foreman for our client M&M Contractors, Alan Barber, said: “I couldn’t fault Suttles in any way. Deliveries always arrive when we need them and no request is ever too big. From the office staff to the drivers, I always feel that we receive a first class service.”