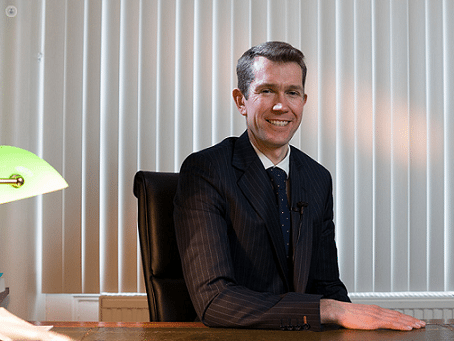 Nuffield Health Bournemouth Hospital is ‘thrilled’ to report that one of its orthopaedic consultants, Mr Charles Willis-Owen, has been included on the 2018 “Top Doctors List” and is the only consultant outside of London, to gain this accolade.

The prestigious ‘Top Doctors’ list features the top five to 10 per cent of doctors internationally who have been identified as good doctors.

‘Top Doctors’ prides itself on having the world’s most rigorous doctor selection process which is overseen by an international panel.  In order to make the list, every specialist has to pass a four-step screening process, including: nomination from other leading clinicians, independent auditing by the Adecco Medical and Science physician-led research team, endorsement by a clinical leader who is a specialist in their field and finally, a face-to-face interview. Once they have passed this process, they are included on the list.

Mr Willis-Owen was chosen due to his work with robotic assisted knee surgery. He is one of a few surgeons in the UK providing this innovative technique which achieves greater accuracy in a procedure. The panel also recognised Mr Willis-Owen for his stem cell work.

Mr Charles Willis-Owen, Consultant at Nuffield Health Bournemouth Hospital, said: “I’m absolutely delighted to have my hard work recognised. I was contacted out of the blue with the news and it’s truly an honour to be chosen by such a prestigious panel.”

David McNair, Hospital Director at Nuffield Health Bournemouth Hospital, said: “We’re thrilled that Charles has been awarded this accolade. ‘Top Doctors’ only features the most prestigious specialists in the world, so it’s a tremendous achievement.”