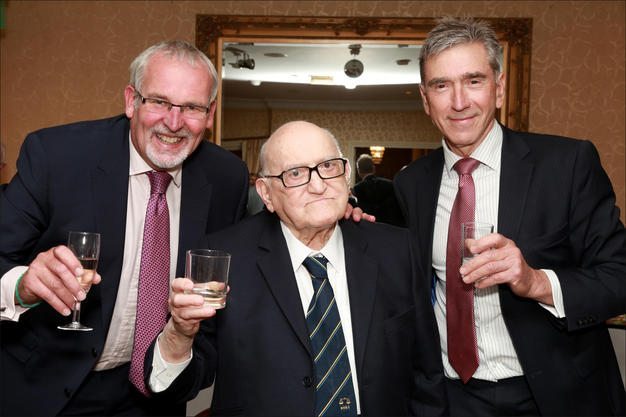 TRIBUTES have been paid to one of the best known members of Bournemouth’s legal community who has passed away just months after celebrating his 100th birthday.

Harry Ellis was the toast of a special party in July organised byEllis Jones Solicitors,the Dorset and New Forest law firm which bears his name.
A leading member of Bournemouth Hebrew Congregation, he passed away on December 23. His funeral was held three days later.
Harry began his legal career in Newport, Monmouthshire, where he was born, and was admitted to the roll of solicitors of England and Wales on May 1, 1939.
Later that year he married Amy, his childhood sweetheart. Amy was also prominent in the local community and served as a Justice of the Peace for many years.
Harry became a well-known member of the Bournemouth law community through his firms Mitchell and Ellis; Harry Ellis and Co; Ellis, Belcher and Co and, latterly, Ellis Fowler Belcher.   The current Ellis Jones was an amalgamation of Ellis Fowler Belcher and Frank Jones & Co.
Harry served as President of the Bournemouth & District Law Society from 1973 to 1974.  Even after formal retirement Harry continued as a consultant to Ellis Jones Solicitors until relatively recently.
Harry joined Bournemouth Hebrew Congregation in 1940 and was an integral part and a leader of the congregation.  In 1947 he was elected treasurer as a young man aged just 31. He would go on to serve the community in various capacities for the next 70 years.
Harry was first elected president of Bournemouth Hebrew Congregation in 1950 and he held this office on no less than five occasions. In 1965 he became a trustee of the congregation, an office he held up to this death.
Nigel Smith, Ellis Jones’ Managing Partner, described Harry as a “Legal Legend.”
He added:“Harry had retired by the time that I joined the firm 30 years ago but I was privileged to get to know him particularly during the course of organising his 100th birthday celebrations.Harry was great company and a fantastic story teller.  I last saw him a week or so before he passed away when he was on good form and inevitably insisted on me taking a glass or two of whisky with him – somewhat of a trademark!  He truly had a life well lived and it was an honour to know him.”
Harry leaves a son, Jonathan.