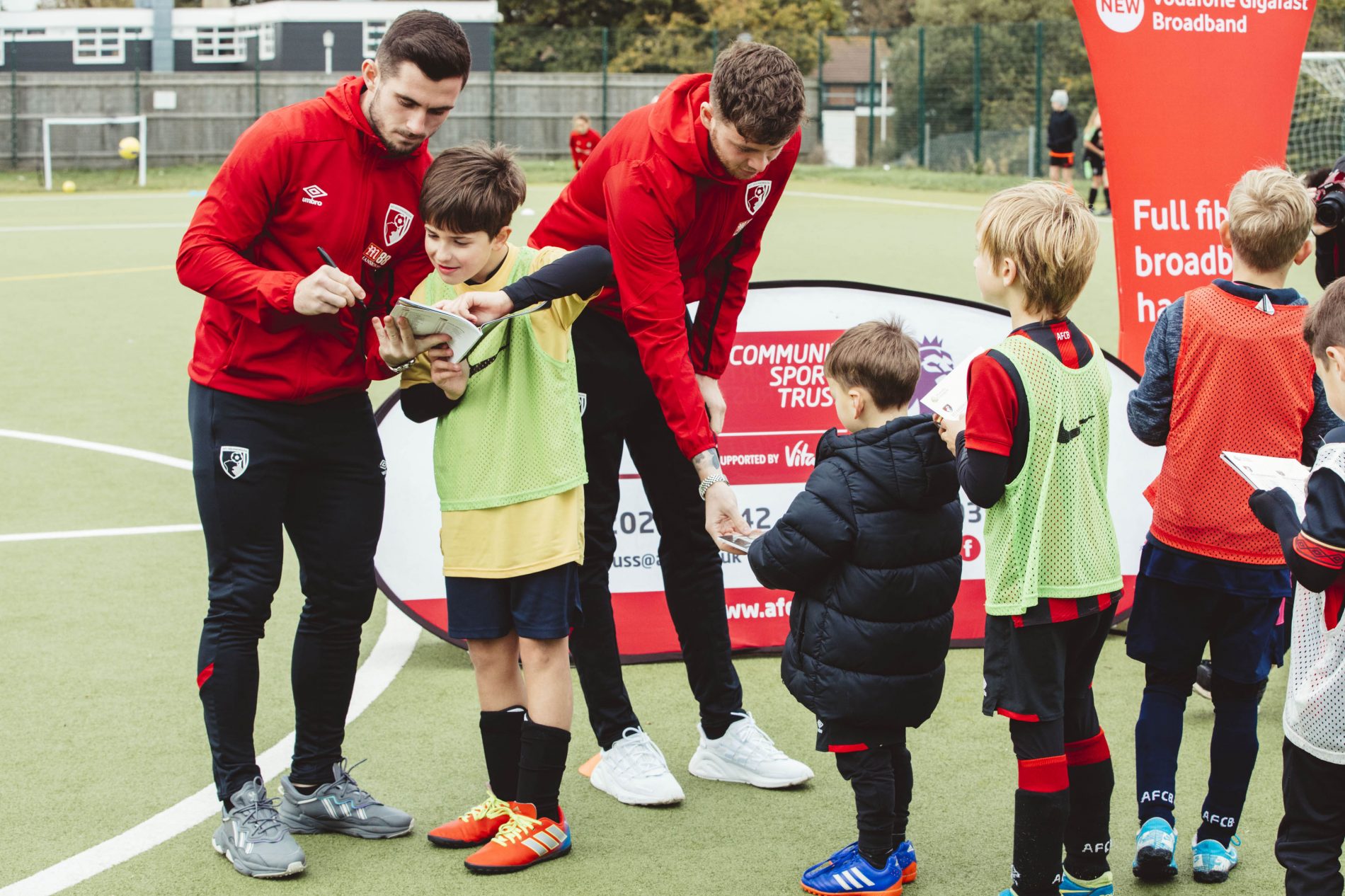 AFC Bournemouth have announced a new partnership with Vodafone for the 2019/20 season.

Vodafone – which recently introduced its Gigafast Broadband service in Bournemouth – has become a Regional Supporter of the Premier League club as well as Official Partner of The Cherries’ Community Sports Trust.

The partnership includes sponsoring the Bournemouth region of the club’s soccer schools for young people.

Aimed at boys and girls aged seven to 14, the sessions encourage children to be active and live a healthy lifestyle through soccer.  More than 1,700 children attended events across Bournemouth during the 2018/19 season.

Vodafone’s Gigafast Broadband team in Bournemouth will have the opportunity to engage with the community as part of the soccer schools sessions as well as having a presence around the ground on selected match days.

One recent such session involved AFC Bournemouth players Lewis Cook  and Jack Simpson attending one of the club’s school holiday Soccer School sessions during half term.

The partnership comes as broadband users in Bournemouth are set to benefit from a huge boost in online speeds and performance as part of Vodafone and CityFibre’s plan to bring full fibre internet connections to one million homes across the UK by 2021.

Vodafone will be using CityFibre’s network to bring Vodafone Gigafast Broadband services to the town, meaning residents will soon be able to enjoy the fastest, most reliable internet speeds.

By using faster and more reliable CityFibre fibre-optic cables at every stage of a connection instead of traditional telephone lines, Vodafone Gigafast Broadband gives users download speeds 16 times faster and upload speeds 125 times faster than the average fixed broadband service in the UK.

Vodafone has started connecting the first homes and business premises in areas of Bournemouth to its full fibre service earlier this month.

Amy Marks, the club’s Partnerships Manager, said: “We are delighted to have Vodafone on board. To be working with one of the world’s leading telecommunications providers is truly awesome.

“We look forward to a long and fruitful relationship with the company.  It certainly reflects AFC Bournemouth’s growing stature in the business and well as sporting field that Vodafone should wish to link with the club.”

Vodafone UK’s Consumer Director Max Taylor said: “We are really pleased to be partnering with AFC Bournemouth and to become an Official Partner of The Cherries’ Community Sports Trust at such an exciting time for both the club and the town.

“Our Vodafone Gigafast Broadband service in Bournemouth is faster and more reliable than standard broadband services, providing incredible upload and download speeds and like the Cherries, it is set to go from strength to strength.”