Find Out More
Home > Company News > He did it! Jon’s winning challenge for Julia’s House

He did it! Jon’s winning challenge for Julia’s House 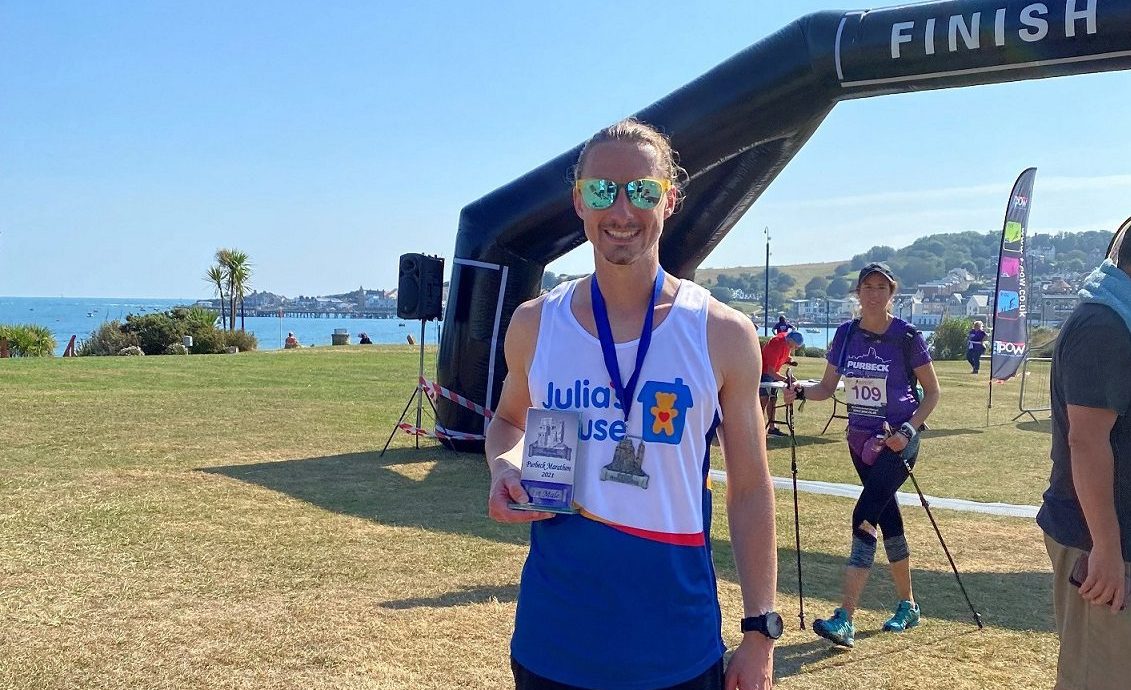 After months of intensive training and preparation, Inspire’s Jon Huggins completed his first full-distance marathon, raising over £900 for Julia’s House!

Making his marathon victory event sweeter, Jon smashed his fundraising target and was delighted to have raised an incredible £909 for his chosen charity.

As his first marathon, Jon wasn’t quite sure what to expect, but with his fiancée and other family members there to see him start in almost-perfect weather conditions, he was feeling positive and looking forward to the challenge and fulfilling his long-held ambition of completing a trail marathon.

Initially following the South West Coast Path out of Swanage, the marathon route was hilly but spectacular.  After eight miles, Jon felt good, he felt he was pacing himself well and was fuelling his body – but didn’t know how many people were in front of him.

It wasn’t until just over half-way, coming towards Corfe Castle, a spectator told Jon that he was in third place – and that second place was not far ahead.  This was just the motivation he needed to press on and within a mile had caught and overtaken the second-placed runner.  In Corfe Castle village Jon’s sister and mum were there to cheer him on, before more hills on the long push towards Studland.

Running solo at this point, with no sign of either first or third place, Jon dug deep and just before 20 miles, he was told by another spectator that he was catching up with first place.  There was another spur of motivation as Jon realised that he might not be able to just complete the race, but he may be in with a shot of winning it!

Passing his remaining challenger and now leading the race, Jon then had a gruelling 5½ miles of steep climbs and opposing descents.  With a couple of miles to go, at the Studland look-out, Jon looked down at a few people on jet-skis in the sea below and started to question what he was doing!

As he descended towards the finish in Swanage, he could see second place starting to make up some ground behind him – but he was determined to keep pushing hard all the way to the finish.  Surprising himself and delighting his excited and cheering family, Jon won the race, taking the trophy for first male!

Jon’s next challenge?  Well, he gets married at the weekend…and will start planning his next marathon challenge after that!

Jon commented: “After training hard for so long, I was just delighted to complete the marathon in a respectable time, to actually win the race was a real surprise for me!

“But the icing on the cake was raising so much money for Julia’s House, it’s such an incredible charity and I’m pleased to have been able to support their work in a very small way.

“Having the marathon behind me, I can now definitely look forward our wedding at the weekend and our honeymoon – I’ve been juggling the training and wedding preparation for the last few months, so I can now relax and enjoy the day!”