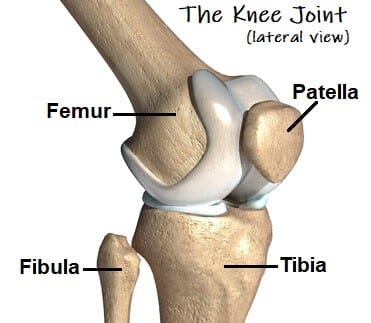 Spotlight on The Knee

The knee is the largest joint in the body and, clearly, is one of the most important , allowing us to walk, run, sprint and change direction, all while supporting the body’s weight.  It takes a huge amount of pressure throughout our lives and, unfortunately, often starts to fail as we get older.  It is also vulnerable to injury during sporting and athletic activities.

Anatomy of the knee: (pic1)

The knee joint is, in essence, 2 bones sitting on top of one another, the thigh bone (femur) and the shin bone (tibia). The kneecap (patella) is found in front of the knee and runs up and down in a groove (trochlea) in the femur.

As with any other joint where a bone touches (articulates) with another bone, we have a layer of white, shiny cartilage over the ends of the bones, so they slide smoothly over one another.   This is called articular cartilage. Within the knee we also have 2 additional discs of cartilage which add stability and act as shock absorbers in the joint. These are known as the medial (on the inside) meniscus and the lateral (on the outside) meniscus.

Ligaments:  Holding it all together (pic 3)

As well as the ligaments, muscles associated with the knee help support the joint and keep us stable. However, the main function of the muscles is to contract, some in one direction, some in another, causing our legs to bend or straighten.  These movements in the knee are called flexion (bending or flexing) and extension (straightening or extending). The muscles which extend the knee are the quadriceps and the main muscles which flex the knee are the hamstrings, (which you often hear about when athletes are injured!)  It is vital that these muscles are working well for the joint to function properly.

Knee injuries which most commonly cause pain and lack of mobility:

If you have knee pain or you knee is having an impact on your daily life and activity, please get in touch.