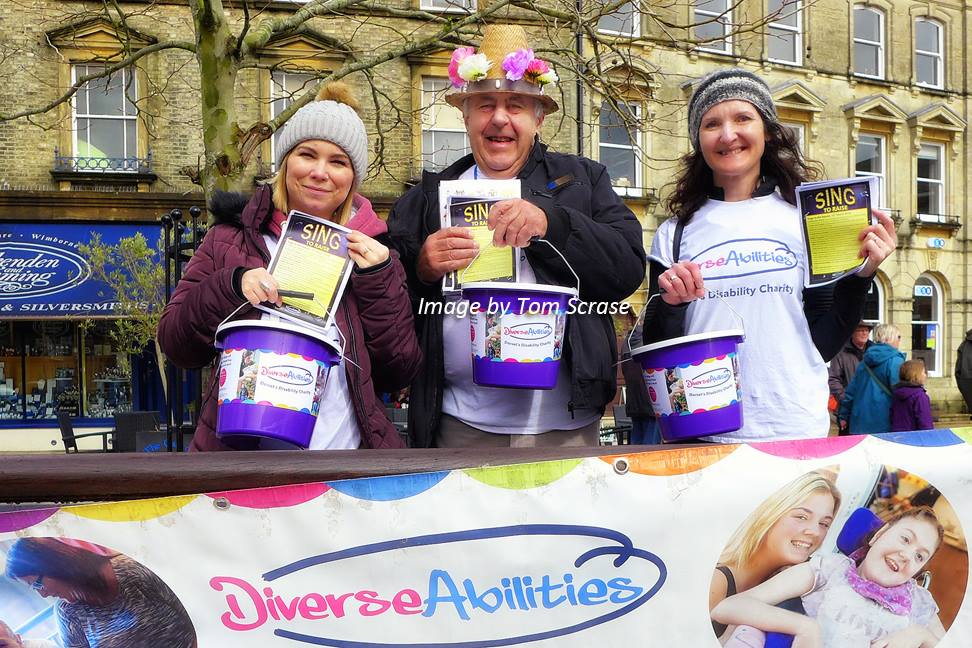 Throughout March over 30 Dorset community groups hosted a range of music events as part of the Diverse Abilities Sing to Raise initiative.

Together, local choirs, musicians, bands, pubs, clubs and supermarkets raised over £2,700 for the charity that supports children and adults with disabilities across the county. This was achieved through a range of events including open mic nights, busking or a gig.

Nicole Warrilow, community fundraiser at Diverse Abilities, said: “From Boscombe through Wimborne to Weymouth, established choir groups, pubs, individuals and bands sang their hearts out to raise funds for Diverse Abilities.  We were thrilled with everyone’s enthusiasm and engagement during the month-long event.”

The Oddfellows pub in Wimborne dedicated their regular open mic night to the charity, led by Paul Thomas of the Men in Black duo. They not only collected on the night and held a raffle, but they even organised a stage in Wimborne Square for various local performers. Overall the pub helped to raise over £1,000 and have also committed to continuing supporting the charity over the year with collection pots.

Ian Kennedy of the band Night Train organised a ‘five-a-day’ busking tour visiting Bournemouth, Poole, Dorchester and Weymouth, ending up in the Drax Arms in Bere Regis. Ian said: “What a brilliant day out, for a great cause, that finally saw us home around midnight. Can’t wait to do it again!”

Weymouth Rock Choir, led by Stacey Hobday, also got involved by surprising everyone in Morrisons Weymouth with a flash mob! In half an hour, over £60 was raised. Stacey from Dorset Rock Choir said: “We were honoured to be asked to be part of Sing to Raise. To raise awareness and support for such a worthwhile charity by doing what we love made it all the more enjoyable!”

The month ended with a finale in Wimborne Square with local choirs and bands performing on stage. Thanks go to Vocal Impact, Citrus Singers, No Direction, Night Train, The 6 ‘o’ clock choir and The Guns of Navarone. The event was kindly sponsored by Wimborne BID and helped to conclude the fundraising campaign.

Nicole added: “We had 11 events taking place during March, most of which were organised by local venues and local performers. We were blown away by everyone’s efforts and thrilled by the amount raised, plus the amount of fantastic people we have met along the way. Thank you to you all!”

If you’d like to get involved with Sing to Raise next year and would like to hold a musical fundraiser in aid of Diverse Abilities please contact Nicole.warrilow@diverseabilities.org.uk or call 01202 718266.